Ed Gates, the founder of the DSNA, died on December 24, 2015. Remembrances were published in the Spring 2016 issue of the Newsletter, but more can and needs to be said about someone who has meant so much to the Society. This issue is dedicated to him and contains four more remembrances of him. They begin with a statement by our current president, Luanne von Schneidemesser, continue with statements by colleagues of his at Indiana State University, and close with his own words. 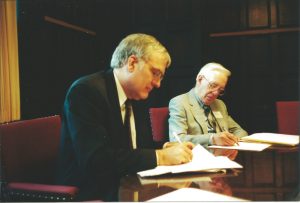 Ed Gates and David Jost in 2001 at Ann Arbor, Michigan

Ed Gates, the force behind the founding of the DSNA, died on Christmas Eve, 2015, as reported in the Spring 2016 Newsletter.  He did not manage to write a history of the Society as he long wanted to do (see Victoria Neufeldt’s DSNA Fellows Profile “J. Edward Gates: Living History” in the DSNA Newsletter of Spring 2006), since he was suffering from the effects of a stroke in the last few years of his life.  I’m sure if he had, he would have modestly downplayed his important role in the founding and support of the Society throughout its existence.  Michael Adams’s excellent article, “The Dictionary Society of North America: A History of the Early Years (Part I)” relates most completely all the work Ed did in undertaking to develop an interest in lexicography and found the Society.  If you as a member of DSNA have not yet read this history and Ed’s role, you can read it in your 2014 volume of DSNA’s journal Dictionaries, pp. 1-35.

I came somewhat late to the DSNA.  I started working for the Dictionary of American Regional English in 1978, when still a grad student. I don’t recall what year I joined DSNA, probably around 1985; I soon became a life member.  The first conference I attended was at Case Western Reserve University in 1995.  I wanted to see what such meetings were like, how they were run, since I knew that DARE and UW-Madison were to host the meeting in 1997.  In Cleveland I met Ed and Marion; he was Vice-President of DSNA and took over as President after the Cleveland meeting, probably the only position he hadn’t yet held in the organization. (OK, so he was president, of the precursor of DSNA, the Society for the Study of Dictionaries and Lexicography which he and others formed in 1975, before the decision on the name was made and before a constitution was ratified in 1977.)  I became Sec.-Treas. in 1998.  He was just what I needed as a novice at the job.  He could answer all my questions, knew everything, could anticipate what I would need to learn.  I sent most queries received from individuals on to him to answer because he could and when I just took over I couldn’t.  Ed came to Madison in May of 1999, before the Berkeley meeting, and we hashed out the agendas for the meetings and in general went over things, and I learned even more about the Society.

Ed was the embodiment of the DSNA.  In the Spring 2015 newsletter it was announced that Ed was the recipient of the inaugural Richard W. Bailey Award for Distinguished Service to Lexicography and Lexicology, as Michael Adams, President at the time and instigator of the award, wrote, an award to be “presented to a senior member of the Society who has, throughout his or her career, significantly advanced lexicography or lexicology by service to one or both of those fields.” (p. 3) No one fits that description better than Ed. No one deserved the award more than he. I have remained in touch with Ed and Marion, especially in recent years.  I called them after the award was announced in the newsletter.  Marion called me when Ed received the actual award in the mail.  He was so pleased and proud!  I was so touched at his joy.  A kind, gentle, modest man who has affected the lives of so many.  Thank you, Ed, for all you’ve done, for being you.  I think of you frequently and will stay in touch, Marion.

Ed’s interment took place in Boston on August 22.  David Jost attended, as a friend and as a representative of the DSNA. 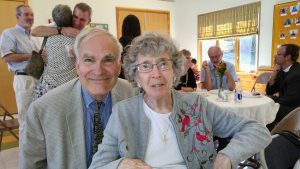 Marion Gates and David Jost at the reception following the committal service, August 2016

Some memories of Ed Gates

The first time I entered Ed’s office in the fall of 1980, I could see evidence of his lexicography everywhere.  Although we had large offices that had started as double dorm rooms, Ed’s two closets were crammed with boxes of files; his shelves were filled with dictionaries, and his office had handmade boxes of the little slips of paper lexicographers used to use.  His wife, Marion, having just stopped teaching nursing, was there helping him file his recently-made slips.  Ed made room for me so we could sit at a tiny typing table, which was also the location of linguistics committee meetings.

Ed had arrived at Indiana State three or four years before me as the result of the establishment of a Master’s in Lexicography and Lexicology and the multiple donations of thousands of dictionaries and generous funds by Warren and Suzanne Cordell.  While the Master’s program went through many transitions, and is now a Master’s in TESL/Language Studies, the Cordell Collection has expanded to over 20,000 volumes in what I believe is the largest dictionary collection in the world (see https://library.indstate.edu/about/units/rbsc/cordell/cordell-idx.htm). Ed introduced me to the collection and opened my eyes to the amount of work involved in lexicography. His own donations of dictionaries to the Cordell Collection inspired me to donate many of mine also when I retired last year.

In addition to being a careful, diligent lexicographer, Ed was also quiet and methodical in his other work and in his life.  When he retired, he brought boxes and boxes of labeled files to my office.  They contained all of the records of not only his time at Indiana State, but also the archived syllabi, lectures, exercises, and tests, both handwritten and mimeographed, of the previous faculty who had taught linguistics before him. It was so characteristic of Ed to keep everything from committee notes to letters.

After Ed and Marion moved to Massachusetts to be closer to their children, we kept in touch, and I was able to visit them several times at their lakeside house near the Quabbin Reservoir. There too, Ed had many dictionaries and continued to work for the DSNA. There too, Ed kept a meticulous paper record of his grandson’s atypical language acquisition. There too, Ed and Marion ate a weekly schedule of breakfasts, eating eggs, oatmeal, etc. each one day per week.

Our correspondence ended when Marion wrote that they were moving into assisted care, but I am extremely thankful for all of the years of working together, learning from each other, and friendship we had.

I arrived at Indiana State University in the summer of 1986 as the newly appointed Special Collections department chair, knowing very little about the Cordell Collection. Later, in consulting a library textbook I used in 1973-74, I found that the collection had already been listed as a unique resource. Only little by little did I find out about Ed Gates’s role in developing the collection in its formative phase and his key role in the establishment of the Dictionary Society of North America. He was a very modest person; he did not brag.

Of course, I began to read extensively about dictionaries and almost immediately sat in on a graduate course Ed taught as part of the master’s degree in English specializing in lexicography—a course he established at Indiana State University. We used classic texts in the field, including Sidney Landau’s important book, along with examples from the Cordell Collection. While there are a number of such programs in the country now, I believe Ed was a pioneer in establishing a hybrid professional program in lexicography in a U.S. institution of higher learning.

Of course, Ed invited me to join the DSNA. Even after his retirement in 1989, I enjoyed seeing him in attendance at the biennial meetings.

Ed and Marion took me into their home and invited me to their church. He and Marion often enjoyed a festive Sunday luncheon afterwards. They lived modestly together in Terre Haute for 19 years before returning to Springfield. I missed his counsel and friendship after his departure.

The Wisdom of Ed Gates

I was unhappy with some of the review editors’ revisions [of Gates’s copy for religious definitions in Webster’s Seventh New Collegiate Dictionary (W7)]. One was a change in my definition of the religious sense of love. In W6 this was defined as “the benevolence attributed to God as being like a father’s affection for his children; also, men’s adoration of God.” That seemed to me not to cover the love Christians are to have for each other. After hours spent trying to define this to match the understanding of the word in Christian theology, I filed this definition: “self-giving concern for others that freely accepts another in loyalty and seeks his good regardless of the cost.” When the copy came to the office in page proof, I checked on this definition and found that “self-giving” had been changed to “unselfish” and “regardless of the cost” had been deleted, greatly weakening the definition, it seemed and seems to me. In W8, the whole sense vanished, being restored only in W10 as “brotherly love.” Today an editor might also be concerned to make this definition gender neutral.  (Edward Gates, 1994. The Lexicography of Religious Language. Dictionaries: Journal of The Dictionary Society of North America 15: 94.)

What role can organizations like DSNA and EURALEX have in fostering teaching about dictionaries and reference science? They can support instruction in the role and use of dictionaries on all levels of our educational systems. They can, as EURALEX has done, sponsor or co-sponsor workshops and other special events at which people considering lexicography as a profession can test their interest, those planning to make dictionaries as a scholarly specialization or as a career can gain basic skills, and working lexicographers can share problems and solutions. They can cooperate with organizations of elementary and secondary teachers to hold workshops on teaching dictionary use. They can cooperate with teachers of modern languages and of English as a second language to hold workshops on the use of dictionaries. Workshops for teachers would include a survey of available dictionaries and teaching materials, criteria for assessing them, and methods of instruction in dictionary use. (Edward Gates, 1997. A Survey of the Teaching of Lexicography. Dictionaries: Journal of The Dictionary Society of North America 18: 89.)