On 20 July Peter Gilliver was awarded a PhD by the University of Cambridge for his work on the history of the OED. The body of published work submitted for consideration included principally his book The Making of the OED—which has just been issued in paperback—but also several papers given at DSNA conferences or published in Dictionaries.

Brianne Hughes reports: the Bishop Fox Cybersecurity Style Guide was compiled over the last 2 years to help the technical editors and security researchers of Bishop Fox be technically accurate and internally consistent in their technical reports. Since its public release, groups like tech journalists, sci-fi writers, and non-security businesses have used it as a starting place for their own in-house style guides. The guide’s usage notes focus on how to capitalize terms in the middle of a sentence, how to pronounce them, and when to use monospace font. Most terms do not have a definition, but many make the user aware of potential confusion between terms that are used ambiguously (e.g., crypto could mean cryptography or cryptocurrency). Version 1 was released in February 2018, and V1.1 was released in late June 2018. Future updates and releases are dependent on industry innovations and suggestions from the public that are sent to style@bishopfox.com. The Cybersecurity Style Guide is currently available as a searchable browser version and as a downloadable PDF at cybersecuritystyleguide.com. A custom Word dictionary based on the word list will be released in late 2018.

DSNA Board Members Steve Kleinedler and Kory Stamper have started a podcast about lexicography and dictionaries called “Fiat Lex.” Each episode is an informal conversation centered around a lexicographical topic guided by Steve and Kory’s experiences as lexicographers. Episodes are released twice a month, and can be found on iTunes and Google Play, or at fiatlex.podbean.com.

Elizabeth Knowles says “In And I Quote, which will be published by OUP in September 2018 (see https://global.oup.com/academic/product/and-i-quote-9780198766759?q=Knowles%2C%20Elizabeth&lang=en&cc=gb), I’ve followed the stories of a number of quotations used today to explore how we find, choose, and use them, and how they can then take on a life of their own within the language. I have actually been working directly on the book for the last three years, but of course it incorporates the experience of editing the Oxford Dictionary of Quotations over more than twenty years.” 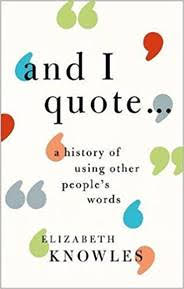 Lynne Murphy’s book, The Prodigal Tongue: the love–hate relationship between American and British English was published in the spring of 2018 by Penguin USA and (with American and British reversed in the subtitle) by Oneworld (London). Building on expertise gained in 12 years of writing the Separated by a Common Language blog, the book takes aims at transatlantic myths and stereotypes about the English language. It has been reviewed widely and positively, including in The New York Times, The New Yorker, The Wall Street Journal, and the Times Literary Supplement, where novelist Lionel Shriver wrote: “The Prodigal Tongue is playful, funny, smart and often humbling. The volume reads well for a general readership, yet evidences enough scholarly underpinnings that it must have been a lot of work. Murphy’s prose is beguiling.” Lynne spent April promoting the book in the US, including a talk at the DSNA-sponsored Metrolex in New York.

Got news? Please send it either in the first or third person, as you prefer, for the next issue of the DSNA Newsletter to Peter Chipman at dsna.membernews@gmail.com.