The latest news includes information about our Publications Committee (PubCom), two Society awards, a gift the Society has recently made, and the dates of our 2019 conference.

New Office and Officer in her own words

“By day, Brianne Hughes is a technical editor at Bishop Fox, where she ensures the quality of information security reports, develops internal reference materials, and provides ongoing training to consultants. By night, she continues her compound morphology research at EncyclopediaBriannica.com. She has shared her linguistic findings with Ignite Portland, SHEL/DSNA, and Odd Salon.

She is a member of the American Copy Editors Society (ACES), is Associate Executive Secretary for the Dictionary Society of North America (DSNA), and is on the board of directors at Wordnik Society, Inc. Brianne received a Masters in Linguistics from the University of York in 2012.”

In general we oversee the information channels of the Society – the journal, the newsletter, and the website. We advise on books to review and suggest reviewers, we make decisions about the physical journal (we chose new paper a while back, and now we’re finishing up a redesign). This year the big push will be to complete the process of moving the newsletter online and migrating the old blog to a new site, with an attendant redesign.

We make recommendations to the Executive Board for areas in which they need to have the final say. There is an open question as to whether “publications” should extend to “communications” more broadly – i.e., social media – because as the newsletter becomes a digital product the activity of communicating with members is migrating more to the Web. This will be a good discussion to take up with the new Executive Board, especially given the expertise of Kory and Brianne.

Luanne Schneidemesser, as outgoing President, and Rebecca Shapiro, as outgoing Executive Secretary, are leaving the committee as are Lise Winer and Michael Adams. We are grateful for their service.

Baillie Ford (nominated by Stefan Dollinger) is the Richard W. Bailey Honorary Presidential Member. Stefan says of her: “She has proven herself far beyond the level of an undergraduate student in the art and craft of lexicography. Baillie has worked on the DCHP62, with interruptions, since 2013. Most crucially, she returned after she finished her BA to work full time on the project. Because of her exceptional eye for detail and abstraction skills, I made her one of our first student drafters. Baillie drafted, under my supervision, almost a quarter of the entries in DCHP62, many of which I could take over not just in their structure; all of them, without exception, were immensely helpful in terms of the quotation evidence she selected from the Bank of Canadian English. After June 2016, when funding ran out, Baillie – herself not being in a good financial position– still offered to volunteer and provided crucial evidence to select queries on my part. There was no way to keep her from the project. She was, from that point on and had been for almost all of 2016, the arms and legs of DCHP62.”

“Because staff sizes are a fraction of what they used to be, [Emily] has very quickly learned many skills that are an asset to the department. She has worked not only on our flagship product, the American Heritage Dictionary of the English Language, but also many of our other titles and is currently the project manager for the new edition of our First Dictionary.

“Emily has learned well from existing staff members but she has also taken it upon herself to seek out additional information on her own time and has become an indispensable staff member. She’s also immersed herself in the production aspect of print projects by learning software like InDesign, which allows her as an editorial member to make editorial decisions while paging a book, which saves a step as compared to editorial needing to address queries flagged by production when they page books.

“In a short time, she has shown a natural affinity for precise defining. She asks all the right questions, and she’s excellent at spotting patterns in existing products and noticing error.”

Contribution to the Cordell Collection

Michael Adams has proposed that we donate $2500 to the Cordell Collection as part of Indiana State University’s sesquicentennial; both Luanne and Steve agreed this was a worthwhile investment. DSNA and the Cordell Collection at the ISU library are intertwined: they are housing the DSNA archives in their Collection; members have used the Collection for years, some receiving a fellowship to do research there; we’ve reported in the newsletter about the Collection; and in 2009 the library bused the whole conference to Terre Haute, gave us tours, a reception, and dinner.

Other conferences of interest to DSNA members:

eLex Conference, Institute of the Dutch Language, Leiden, the Netherlands, second half of September 2017. https://elex.link/elex2017/

The ninth ICHLL will be held in Italy in Santa Margherita Ligure on June 20-22 2018. The conference website www.ichll9.wordpress.com

The XVIII EURALEX International Congress will be held July 17-21 2018 in Ljubljana, Slovenia. http://euralex2018.cjvt.si

Up to now the only regional meetings have been those of MetroLex. I plan to organize an event in New England next year and I hope those of you in other parts of the country and abroad will do the same. The Conference in Barbados reminded me once again how fine it is to see people in person and two years is just too long to wait.

Below is a photograph of the last MetroLex meeting held 4/28/2017 and sponsored by (as Rebecca Shapiro says) “CUP and Columbia University, esp., John McWhorter and his wonderful student.” 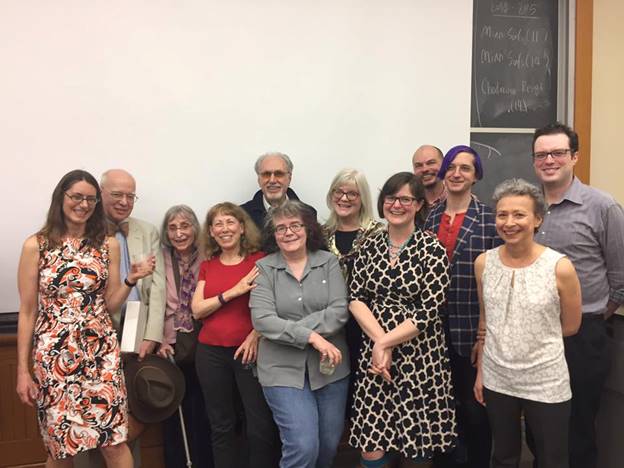 Rebecca says, “The caption we had on Twitter was ‘What do you call a group of lexicographers?’ and replies were such things as brace, gaggle, pride, collocation, collexion, drudges, glossary.”

[My own preference is drudge. DJ. Peter Chipman prefers collocation.]