Just recently, I moved from a home in which I’d lived with my family for more than 22 years to a new house. The new home is somewhat smaller, so I decided to take a close look at my library, which sprawled over several rooms. Did I really want to keep books I hadn’t even looked at for a dozen years or more? I want to admit that word books didn’t enter into my decision making. As a curator of the Cordell Collection, I had never collected in this field beyond a few modern books to help me ferret out a meaning in another language.

I decided to donate many books to the public library, which conducts a monthly book sale and even posts a few books on Amazon.com and other sites. Given my experience working with other collectors, I realized I was doing my family a service, because I have known many collectors, including those collecting dictionaries and other word books, who had not done so. Almost invariably, their collections were broken up. Collectors of dictionaries are no different in this respect, but in another regard, they are very different. Few individuals in the public know anyone who is doing it. It is like a clandestine society. Thank goodness for the Dictionary Society of North America. It provides a conduit—a kind of information exchange—that allows them to find a haven where others, whether dictionary collectors or not, can and do provide support and acknowledge their contribution to the society and beyond.

Of course, it takes a special person to collect dictionaries and similar books.  They appeal to word lovers, individuals oriented to intellectual history, professional and historical lexicographers, and teachers of related subjects. And perhaps individuals who have a fascination with a literary figure such Samuel Johnson. I wonder how many thousands of people on the planet collect dictionaries. Indeed, I wonder if there are a thousand individuals who do it.

The first collectors of dictionaries I can recall meeting were at the DSNA meeting at The University of Missouri, Columbia, August 9-11, 1991. (I’d forgotten the date, but the recently added copies of older newsletters to the DSNA website made it easy enough to find out when the meeting took place.) At this meeting, I met Jerry Farrell, Tom Rodgers, and Gene Freeman. It was Jerry who introduced me around, and I think he introduced me to Allen Walker Read, whom he had himself just met. 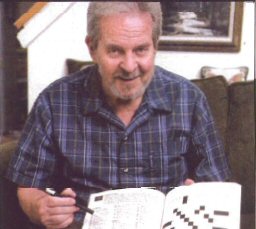 Jerry and Allen became friends, and Allen sent Jerry many keepsakes and publications over the years. Jerry, who lives in Indianapolis and was a math professor of Butler University, and I became friends, and more than once I gave him and others tours of the Cordell Collection. Jerry focused on slang and the like in his collection, although along the way he acquired many standard works. He has been interested in language as entertainment for as long as I have known him, and he and his wife continue to edit the online publication Word Ways, https://digitalcommons.butler.edu/wordways, which is hosted by Butler University. Jerry’s well-known for the ingenuity of several of his crossword puzzles, including some published in the New York Times. In addition, Jerry continues to organize a biennial celebration honoring the accomplishments of Martin Gardner. Jerry had about 3,500 books at one time in his collection, but he has whittled them down to 400 or so. Many of these remaining items are gifts he received from Allen Read. 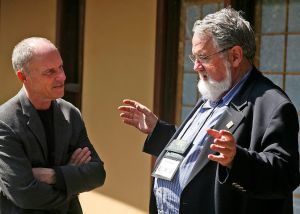 Tom Rodgers had several collections, one including puzzles and games. His dictionary collection was informed by the book catalogs of the Cordell Collection. He tried to collect in the same area but concentrated on titles that were lacking. Tom was responsible for my undertaking Incunable Dictionaries, a work he said both collectors and researchers might make use of. He contributed funds to the project anonymously! In addition, the listing of books, which made a stab at assembling in one place a list of dictionaries published first during the infancy of printing along with citations for subsequent printings and editions into the modern age. There was talk of his donating books to Indiana State University and perhaps more to his alma mater, Emory University, but Mr. Rodgers was diagnosed with a virulent, fast-acting cancer and did not live long enough to carry out any plans of donation. His books were dispersed to the marketplace, some by way of auction and some through booksellers, including one with whom many members are familiar, Rob Rulon-Miller. An obituary can be found at http://wiki.yak.net/1018.

Gene Freeman I knew of because he had reluctantly sold some of his books to a very persuasive Warren Cordell. I never expected to meet him, but there he was at Missouri. Most of my talks with him at the 1991 meeting and afterwards made it clear that he was unhappy to have lost his books, which he viewed to be somewhat like offspring. I had to convince him that the books were actually being used by researchers. Even then, he expressed misgivings for parting with some of his most stellar holdings.

I hadn’t collected used or rare books for many years before coming to Indiana State University. I gave it up in graduate school—I was poor! But I was inspired by these three gentlemen at this 1991 conference and went off to a rare book shop near the university to make a purchase. For many years afterwards, I continued to collect books, although never dictionaries, as it’s seen as a potential conflict of interest for librarians to collect in areas which they curate. But the collecting bug is hard to resist once you are bitten. One finds another area to spend one’s cash.

Eventually, I stopped collecting, just as Jerry Farrell did. Collecting is a young man’s game in many ways. I found I didn’t have the time or concentration to keep tabs of or make much use of my collection. I had responsibilities that kept me enmeshed in other activities. I found myself envying collectors who were also active scholars. That’s how many of my books made it to an institution that could make use of them for profit at the very least.

I don’t regret having been a collector of favorite literary authors. Likewise, I particularly cherish my friendships with Tom, Jerry, and Gene. And it says a lot for the Dictionary Society of North America that book collectors of language books have a viable and active place in the organization.